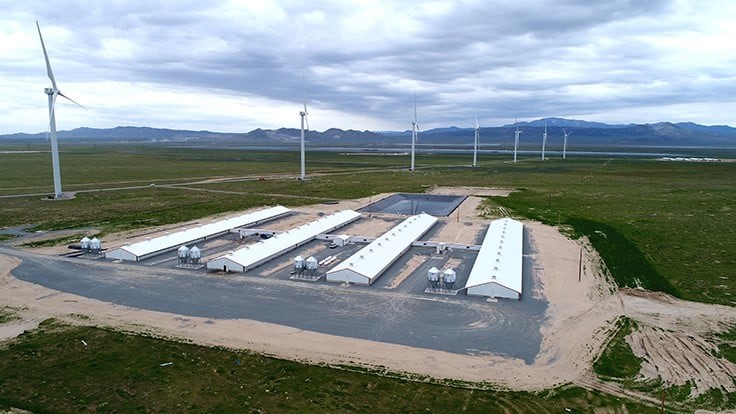 How the agricultural industry is embracing anaerobic digestion

Large-scale agricultural sites keep America (and much of the rest of the world) fed, but they also generate large-scale challenges in the form of manure and other byproducts that need to be handled properly.

The methods to handle agricultural byproducts can vary significantly depending on the type of livestock or crop, but increasingly the common goal is in generating the highest possible energy yield from the materials being discarded.

Agribusiness most often makes investment in anaerobic digestion (AD) systems with specialty technology providers and contractors. The availability of smaller scale AD systems, however, could provide an opportunity for traditional solid waste firms to connect that technology with farmers, ranchers, growers, food processing plants and other current and prospective agribusiness customers.

Farmers have redeployed manure as a fertilizer and other byproducts in sustainable ways long before the word “sustainability” was being discussed in corporate boardrooms. Still, companies are working to improve disposal and treatment practices in the agricultural sector, as increasing numbers of large agribusinesses are showing.

Creating soil amendments from such byproducts may not be especially new, although Perdue refers to its AgriRecycle facility on the Delmarva (Delaware, Maryland and Virginia) Peninsula as “the first and only recycling nutrient operation” in that region.

The newer facet of the partnership revolves around the construction of an anaerobic digester.

As part of the agreement, BDC took possession of Perdue’s AgriRecycle facility, which is permitted to compost 30,000 tons of poultry processing and hatchery byproducts annually from poultry farms on the Delmarva Peninsula.

BDC will work within the Delaware Department of Natural Resources and Environmental Control and Sussex County permits process to construct a digester at the site that will “transition the poultry processing byproducts to both renewable natural gas and an organic soil amendment while continuing to support the compost facility,” according to BDC.

“Our commitment to environmental stewardship is stronger than ever,” Randy Day, CEO of Perdue Farms, said at the time of the partnership announcement. “With BDC, we have found a partner that enables us to be more sustainable, create cost-savings, and help produce renewable energy while continuing to address soil health and nutrient management in the environmentally sensitive Chesapeake Bay watershed.”

In June, BDC announced progress on the project in the form of a companion agreement reached with Columbia, Maryland-based Chesapeake Utilities Corp. that will bring the gas created in the AD process into the regional natural gas network.

Per the 2020 agreement, “The resources generated from organic material at BDC’s AD facilities in Delaware, known as the Bioenergy Innovation Center, will be processed by Chesapeake Utilities Corp. and Eastern Shore Natural Gas, and Marlin Gas Services will facilitate the transport and receipt of RNG [to] Chesapeake’s own distribution system and ultimately [it will be] distributed to its natural gas customers.”

States Shawn Kreloff, the CEO of BDC, “Chesapeake Utilities Corp., by working together with municipalities and the food industry, understands that digesting organics is a solution that creates a sustainable, environmentally friendly supply of renewable natural gas while also helping to solve major waste management problems.”

Perdue Farms is not the only large agribusiness to have made investments in AD, a process that BDC describes as “us[ing] naturally occurring microbes to break down food waste into biogas and an organic soil amendment used by farmers.”

Smithfield, Virginia-based Smithfield Foods, one of the largest pork product makers in the world (if not the largest), has been investing in large-scale AD systems since at least 2014.

That year, the company announced construction was underway of an $80 million project to use AD technology to harvest RNG from hog finishing farms operated by Smithfield subsidiary Murphy-Brown of Missouri LLC (MBM).

The lead technology provider for that project was St. Louis-based Roeslein Alternative Energy LLC (RAE). On its website, RAE has posted an article from trade publication Successful Farming that refers to the project as one that “helped Smithfield save the worst hog farm in America.”

According to Betsy Freese, the article’s author, Smithfield purchased what became its Premiums Standard Farms (PSF) facility in Missouri with a legacy of problems that included it being bogged down in nuisance lawsuits, having barns in disrepair and suffering from poor pig performance. The operation also featured “tight building clusters [which] reflected historic design practices that had to be overcome,” writes Freese.

By 2014, when the RAE AD project was announced, Smithfield had agreed to implement such technology to handle its waste and byproducts as part of federal and state consent decrees it had signed, according to Successful Farming.

“This project can be a model to show how both economic and environmental benefits can be gained by using manure in a different way,” Rudi Roeslein, president of RAE and CEO of Roeslein & Associates, said at the time of the 2014 announcement.

The covers turn the lagoons into anaerobic digesters, where naturally occurring microorganisms decompose the manure in an oxygen-free environment. Biogas rises to the top where it is collected and cleaned of impurities. “What remains is more than 98 percent methane with approximately the same chemical composition as natural gas that can be used for vehicle fuel or [be] injected into the natural gas grid system,” states RAE.

The non-digestible solid residue, meanwhile, can be used by regional farmers as a natural fertilizer, and the water is deemed clean enough for use in irrigation applications.

In livestock applications, AD can handle some forms of waste that “would otherwise be sent to a landfill where it would decompose and release greenhouse gasses, or it would be incinerated, contributing to air pollution,” according to BDC. “Anaerobic digestion sequesters and transforms this waste, reducing the burden on local infrastructure and providing a source for renewable energy,” adds the firm.

It does not take the massive scale of a large livestock facility to deploy AD technology. A number of technology providers have scaled down AD systems to be used by smaller generators of agricultural byproducts, including at food processing facilities.

One of America’s largest cities also is poised to deploy AD technology in the near future, with funding coming together for a $32 million AD facility to be built on the South Side of Chicago.

The project, led by Chicago-based Green Era, has received a $3 million investment from the state of Illinois and has secured the involvement of global energy firm BP to market the gas produced by the digester.

The Illinois governor’s office says the project has been designed to “transform a vacant brownfield parcel into a new Green Era Urban Farming Campus that will provide access to fresh food and renewable energy for a community that has historically suffered from disinvestment and a lack of employment opportunities.”

As envisioned, Green Era’s 9-acre farming parcel will include an AD system designed to “leverage waste bound for landfills into reusable sustainable energy for local businesses.” The AD unit installed will “break down organic food waste, producing nutrient-rich compost to help meet the demand of urban farmers and community gardeners. The digester will also help produce renewable energy that will power its facilities,” states the governor’s office.

If the project meets it targets, it will recycle 85,000 tons of food waste and reduce up to 42,500 tons of CO2 emissions per year. According to BP, partnering with Green Era to sell the energy produced by the AD system was an attractive opportunity for the company.

“When BP was approached by Green Era to collaborate on this project, we knew it would be a great opportunity to support sustainable neighborhoods and demonstrate there is a market for low-carbon fuels like renewable natural gas,” says Janet Kong, BP regional business leader of Global Oil Americas.

Adds Kong, “It’s exciting to be a part of a local project that fits with BP’s ambition to get to net zero by 2050 or sooner and help cities get there too.”

This article originally appeared in the Oct. issue of Waste Today. The author is a senior editor with the Recycling Today Media Group and can be contacted at btaylor@gie.net.