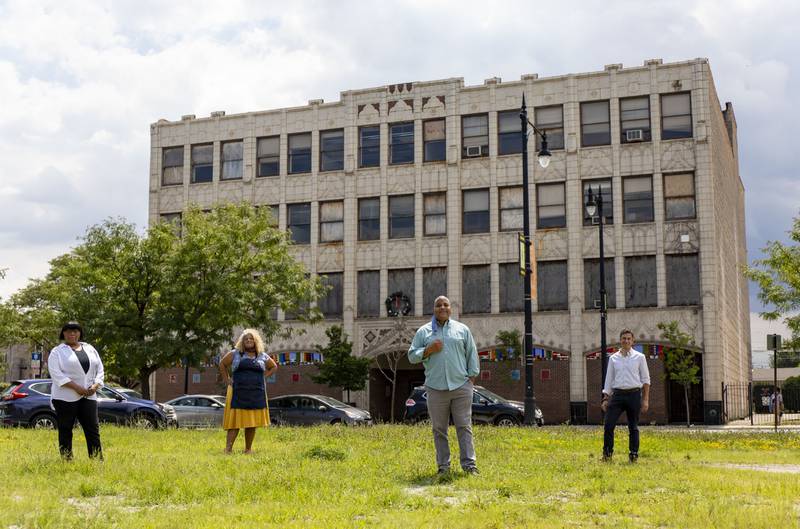 A shuttered 1920s terra cotta building and a vacant former Chicago police impound lot will be transformed into neighborhood hubs of healthy living, health care, nutrition, urban farming, a recycling enterprise and more under a resident-driven development plan for the Auburn Gresham community.

For Carlos Nelson, the redevelopment of the shuttered 1920s building, at 79th and Halsted streets, symbolizes the transformation of a community.

“Seventy-ninth and Halsted, with this four-story (building) sitting ominously vacant, has become the background of our community,” said Nelson, the CEO of the Greater Auburn-Gresham Development Corporation, a partner in the project. “What this means for me is we are now able to hope. It literally provides hope to youngsters, families and seniors who have endured decades of disinvestment and blight.

“We are going to transform this building to a building of light and hope, anchored in health and wellness.”

The foundation announced the Chicago Prize contest last year. Entries were narrowed to six finalists in neighborhoods where historic lack of investment and patterns of segregation have created unhealthy, dangerous living conditions, ranging from a lack of fresh food to inadequate health care to persistent street violence.

Strict criteria were developed and then weighed against each project to assess their financial and operational viability, as well as the expertise of the applicants.

Based on the strength of the proposals, the foundation elected to award not only the main prize but also establish a $2.5 million fund to support the other finalists, cash it hopes will be matched.

“We came out of this great admirers of all six of the plans, and while there is one winner ... our hope is all six finalists are going to get funding,” said Penny Pritzker, former U.S. commerce secretary and sister of Illinois Gov. J.B. Pritzker. She runs the foundation with her husband, Bryan Traubert. “We are going to try and help them to get greater visibility.”

Some of the other finalists have already generated funding from other sources, including a $7 million grant from the city of Chicago to support one part of the North Lawndale proposal — a new surgical and ambulatory clinic and campus that will be built across from the main Mount Sinai Hospital.

The cash awards come at a critical time for some of Chicago’s most under-resourced neighborhoods, as they have taken a double blow from high rates of COVID-19 and a sharp uptick in violent crime this summer. In fact, Auburn Gresham just experienced the worst mass shooting in recent Chicago memory when 15 people were shot outside a funeral home.

The devastating effects of the pandemic and the violence have provided a stark look at the tragic cost of disinvestment on the South and West sides, which has stretched over many decades and through many administrations. In the wake of the funeral home shooting, Ald. David Moore, 17th, made an impassioned plea for help, calling for the public and private sector to step up with not millions, but “billions.”

It wasn’t lost on some contest entrants that they had to seek the Pritzker funds in part because of that history of neglect. Still, one of the North Lawndale finalists said he is not looking back, only forward, intent on using the momentum of the application process to find money and resources to make their plans a reality.

“This has been decades of disinvestment in our community, so what you see is the impact,” said Rodney Brown, a member of the executive committee of the North Lawndale Community Coordinating Council. “But we also believe now is a time to invest in communities like North Lawndale. ... It is going to happen going forward. We aren’t going to look at what they didn’t do.

“We sincerely plan to continue to search and find the money,” Brown said. “There is already great things happening here. This is a community that is going to grow. If you want in, get in now.”

Their initiative was selected for the Chicago Prize because of its “unique” combination of projects that have the potential to create long-term economic opportunity, including the creation of 300 construction and 300 permanent professional jobs, according to the foundation.

In a telephone interview Thursday morning with the Tribune, Pritzker and Traubert noted Auburn Gresham’s sustainable economic model and its focus on jobs, health and creating new amenities for the community. The project also got noticed because it is being developed close to a new Metra stop, planned for 79th Street.

The “Always Growing, Auburn Gresham” plans are anchored on two locations. The former Rusnak Brothers Furniture Store and Showroom at 79th and Halsted streets (and later a state public aid location) will be turned into a “healthy-lifestyle hub,” with a health center offering a full range of services including dental, behavioral health and nutrition and wellness, as well as a minority-owned pharmacy. The development includes plans for a green roof and outdoor educational and meeting space and a Black-owned sit-down restaurant, a dining opportunity in a community that doesn’t have many.

A little farther south at 650 W. 83rd St. is the location of the second hub, according to the proposal, a renewable energy and urban farm campus that will include a food waste recycling enterprise that is projected to divert 85,000 tons of waste from landfills each year.

The campus also includes an outdoor market and community education and programming facilities. The urban farm, along with a growing collective, is expected to grow up to 26,000 pounds of food per year in on-site greenhouses, serve up to 300 customers a day and offer specialty crops to local restaurants.

The collaborative has secured all the site locations, as well as additional funding from city, state and bank financing, planners said.

For Nelson, that means sights and sounds he has long-imagined will soon be real.

“In the year 2021 ... you will see bulldozers, excavators and cranes in the air,” Nelson said. “That is an image I cannot wait to see. Just as (former Mayor Rahm Emanuel) used to count the cranes in the air downtown, we are going to be counting cranes in Auburn Gresham.”

Penny Pritzker said Auburn Gresham’s plan — and all of the finalist communities — show the value of tapping into local know-how about where and what to build.

“These projects are driven by the people in those neighborhoods,” she said. “This is what they think is most important, and that is what is really important to the Chicago Prize. We need, as a society, to recognize that and to be humble as we listen to what folks in those communities need and know.”

Traubert, an ophthalmologist who is a former president of the Chicago Park District Board of Commissioners, said he believes there is awareness of the inequities in Chicago and that the city will not “thrive” if some neighborhoods are doing fine while others continue to suffer from years of disinvestment.

“We’re Chicagoans, and this is our home,” Traubert said. “And Chicago has some real challenges now. But we are not in isolation. We talk to a lot of people who want to get involved, more than have to date. I don’t think I need to tell people what we are all feeling right now. We are all in this together.”