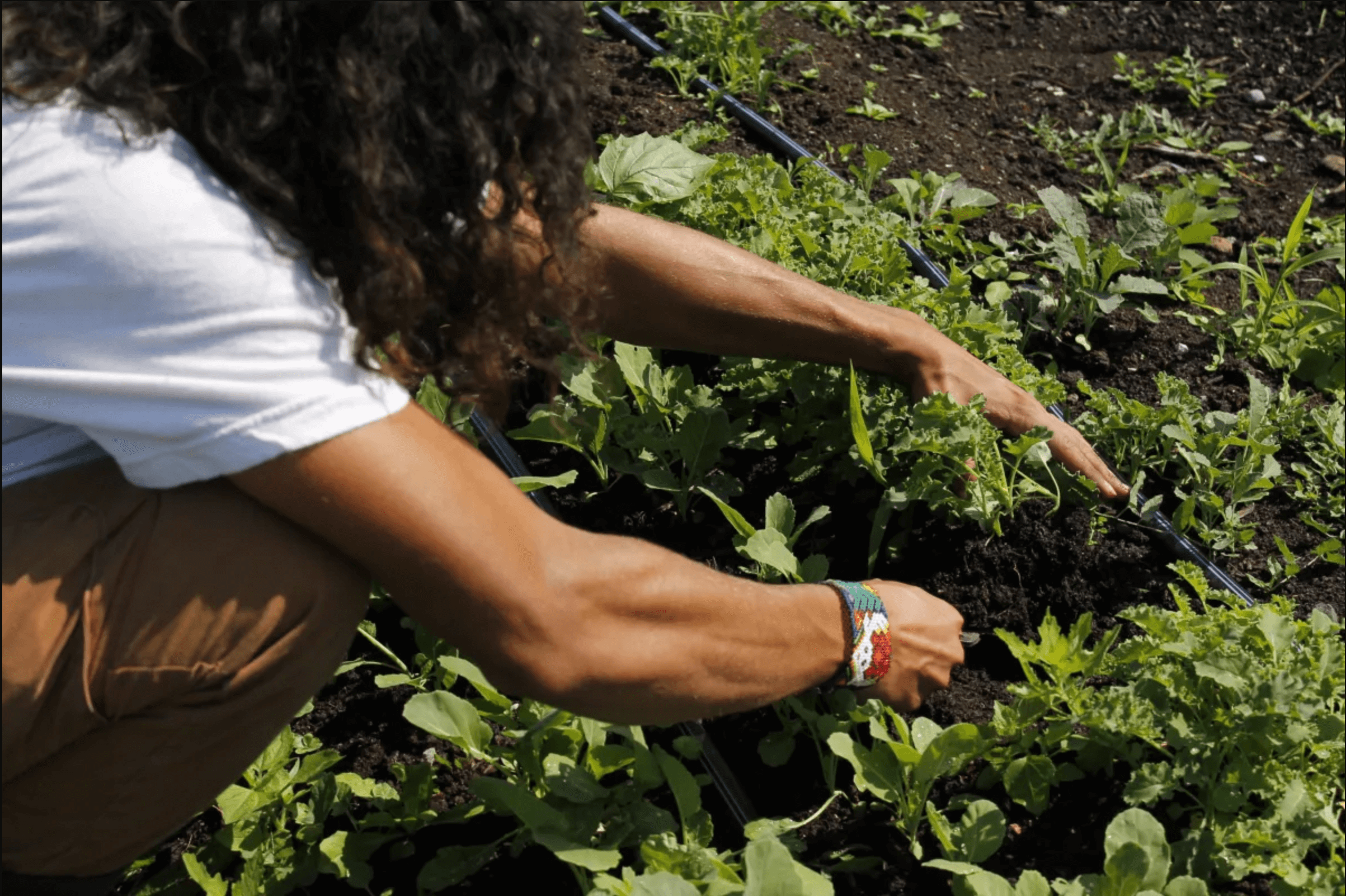 We’re now in the eighth month of the COVID-19 pandemic, and millions are struggling to maintain their incomes and housing. But even before the pandemic started, one Chicago nonprofit, the Urban Growers Collective, was working to address residents’ struggles to access another basic necessity—fresh, healthy food—and the current crisis has only emboldened that work.

From mid-March to the end of September, the group delivered nearly one million pounds of produce to more than 25 partner organizations across the city, including Howard Brown Health on 63rd, Grow Greater Englewood, and West Side Mutual Aid, says UGC development associate Brandon Lov. That number, Lov says, includes produce boxes UGC delivers directly, as well as deliveries the group coordinates with its partners, including prepared meals and boxes of fresh produce, dairy and meat as part of the U.S. Department of Agriculture’s Farmers to Families Food Box program.

“Our biggest pivot was from affordable sales of produce to hunger relief,” says Erika Allen, who cofounded UGC with Laurell Sims in 2017. “So, donating produce to folks in need as opposed to the economic development model that we’ve continued.”

Allen says the group’s work has been crucial in addressing food insecurity—or what she and others have come to call “food apartheid”—on the south and west sides even before the pandemic.

“It’s really an issue of apartheid and where we value putting a diverse kind of selection of options,” Allen says. “You think of having a multitude of big chain grocery stores, having a vibrant farmers market, having a variety of sit-down restaurants that have all types of cuisines. A vibrant food culture, it usually reflects into a vibrant economy and all these other pieces.”

UGC operates eight urban farms on 11 acres of land in Chicago, mostly on the south side, that are aimed at giving underserved and disinvested communities the healthy food they desperately need. And in keeping with its mission, UGC’s farms help cultivate economic opportunities for the community alongside their produce production.

At one such farm in South Chicago, UGC not only provides space for locals to grow their own produce in a community garden, the group also operates an on-site business incubator, Farmers for Chicago, that gives folks access to land and tools that they need to establish and expand an agricultural business. And once participants are ready, UGC helps connect them with market opportunities to help the businesses bloom and propagate.

The necessity of UGC’s work comes out of a history of disproportionate advertising of unhealthy foods in Black and Brown communities.

According to the Rudd Center for Food Policy and Obesity at the University of Connecticut, Black and Hispanic youth are exposed to a significantly higher volume of food advertisements than their white counterparts, and are also disproportionately targeted with food companies’ least nutritious products, like sugary drinks, fast food, and candy, in turn contributing to health disparities in these communities.

A January 2019 report authored in part by the Rudd Center’s Dr. Jennifer L. Harris says “companies that view advertising of nutritionally poor brands to multicultural consumers as a business opportunity, should weigh that opportunity against the resulting costs to these communities.”

Experts from the Council on Black Health at Drexel University and the Salud America! University of Texas Health Science Center at San Antonio also coauthored the report.

Now, amid a seemingly endless pandemic, UGC’s COVID-19 relief efforts are just a continuation of its work providing what Allen calls

Almost as a testament to their purpose, UGC has been able to bolster its work and expand amid the pandemic and the additional compounding crises. In early August, UGC announced it was partnering with Green Era to cultivate a seven-acre farm as part of a nine-acre renewable energy and urban farming campus in the Auburn Gresham community.

According to the announcement, the $32 million project will create more than 40 permanent jobs and 240 initial construction jobs in the community, and will also produce year-round, low-cost organic produce, as well as educational programming.

“This project really, really well sort of defines [the new green economy] because it shows in a very tangible way how taking small little stuff like recycling organics can make this impact in the community that has seen loss of industry for decades,” Feldman says.

Addressing food insecurity in Chicago was a top campaign priority for former Chicago mayor Rahm Emanuel in 2011, when his administration set their sights on so-called food deserts, places without nearby access to a grocery store. But as Allen pointed out, using that metric can paint an unclear picture about the true scope of food security in a community.

“You can open a grocery store in a food-insecure community, but that doesn’t change its food insecure status,” Allen says.

According to data on food deserts from the city, the Auburn Gresham community in which the new urban farming campus will sit is not considered a food desert, she says, “but it absolutely is.”

Alongside its food distribution efforts, in July, UGC launched its first collective-supported agriculture system, also known as a CSA or cropshare, that allows people to buy weekly boxes of roughly a dozen seasonal vegetables. Program director Lauralyn Clawson says the number of cropshare participants usually hovers around 60, adding that UGC will likely continue the cropshare after the pandemic, with the current season finishing at the end of October.

The group’s Fresh Moves Mobile Market, an old-school bus converted into a mobile farmers’ market, was also recently retrofitted to be COVID-19 safe, meaning customers could once again shop in-person on the bus.

But as with what feels like truly everything in the world right now, UGC’s hunger relief work amid the pandemic didn’t come without challenges.

Since the early days of the pandemic, people with credit and debit cards have had easy access to online ordering for groceries, food, and pretty much anything else. But for people using Supplemental Nutrition Assistance Program (SNAP) benefits, program rules up until recently barred online transactions.

Starting in early April, the U.S. Department of Agriculture began expanding a pilot program allowing online purchases with SNAP benefits, which had been launched in 2019 in New York. According to the USDA website, 46 states, including Illinois, are now part of the pilot program.

But in the early days of the pandemic, the inability to buy groceries online meant low-income people had to brave the dangers of physically shopping in order to get their food— just another way that COVID-19 illuminated the myriad ways privilege and power are inextricably linked to safety and health in this country.

But amid that early SNAP uncertainty, UGC was again able to rethink its strategy and provide much-needed food relief to people in this unprecedented crisis.

“We just pivoted our sales, using the sales of people who come to the site and have no-contact pick up, and taking those dollars and using them to donate produce,” Allen says. “So it didn’t impact our organization’s budget, and allowed folks who could afford to purchase produce for their own households to also donate, and the sales of that produce that they purchase[d], we used to donate to folks who couldn’t access their resources.”